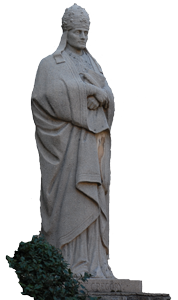 Gregorius, son of Gordianus and Silvia, great-grandson of Pope Felix III, was an educated Roman noble with superior administrative and diplomatic skills. In his mid-thirties he forsook his secular political life for the contemplative one of monk in a Benedictine monastery. That change was short-lived, for by unanimous consent of priests and people he was elected on September 3, 590 to succeed Pope Pelagius II, who had died from the plague that was devastating Rome. Reluctantly, Gregorius accepted the challenge, and with determination, faith and charity ushered in a papacy which served as the liturgical and philosophical foundation of today’s R.C. church. He served as the “Servant of the servants of God.”
Pope Gregory I was a champion of the poor, the widowed and the orphaned. He espoused non-violence and fairness without favoritism, and insisted that his clergy do likewise. His evangelization effort, in particular his extensive use of missionaries, sparked the conversion of central and western Europe. He is remembered today as the patron saint of not only England, but also, the West Indies.
Pope Gregory’s writings speak to us today in these quotes:

“Learn the heart of God in the words of God, that you may sigh more ardently for the things that are eternal, that your soul may be kindled with greater longings for heavenly joys.”

Pope Gregory I died March 12, 604 and was quickly referred to as Gregory the Great, Doctor of the Church.